Voting is now open for the finalists of the inaugural Young Engineers Award.

Launched earlier this year by the LAMMA Show and The Institute of Agricultural Engineers (IAgrE) the award aims to celebrate the new generation of talent in agricultural engineers who are working to help UK farms become more sustainable, profitable and efficient.

From a strong field of entries, a panel of judges selected a shortlist of five: Stephen Davies, Will Dunn, Thomas Land, Hywel Phillips and Colin Taylor. It is now over to visitors to www.lamma365.com to help decide who should win. Details of each finalist and their invention can be found on the website.

The public vote, combined with scores from the judging panel, will decide the winner who will be announced at LAMMA on the 12th January 2022. Public voting closes on the 10th December 2021.

Stephen Davies believes that his feed bucket, which grabs mixes and distributes silage and feed, is a low-cost alternative to a diet feeder. Aimed at small sheep and cattle farmers, the feed bucket is used in conjunction with a telehandler and loader and can help reduce feed costs. Stephen was inspired to develop it after hearing feedback from customers in a previous job as well as experiences on his own small family farm.

Will Dunn was prompted to develop his Ag-Drive app after seeing how frustrated his father (a farmer and contractor) was over the invoicing process. The resulting ‘all-in-one’ cloud-based app is a cost-effective paperless system to manage a farm business from job planning through to completion, along with the ability to send invoices whilst linking to accounting packages such as Xero and QuickBooks. It was launched to market in June 2021.

Thomas Land has spent three years developing the Landwrx IRM-8R inter seeder which is used to sow cover crops between crops such as maize. It is designed for high work rates with low running costs and, due to its high clearance, it can work in maize at the six to eight leaf stage. The inter seeder can help farmers access the benefits of cover crops including capturing nutrients, carbon capture and providing extra grazing for livestock, while preventing soil erosion and leaching.

Hywel Phillips has developed a modified 40ft combine header trailer for transporting telehandler attachments and mobile weigh beams during harvest. The idea came from his role on an arable farm which operates over a large area with harvest equipment needing to be moved frequently. Hywel says that his innovation offers time savings and offers a safer alternative to traditional transport options.

Colin Taylor was inspired to develop his Rumex intelligent spraying system after talking to a neighbouring farmer. His system can transform standard agricultural boom sprayers into “See + Spray” machines which can simultaneously locate, identify and spray weeds. Colin’s project started in 2018 as part of his MSc degree but has more recently become a full-time commitment as it nears commercialisation.

The Young Engineer Award is kindly sponsored by Househam Sprayers which has been an advocate of the LAMMA since it started 40 years ago, using the show to exhibit its own developments and innovations.

“We are continually supporting the next generation of engineers, offering apprenticeship programmes, Young Farmer Club visits, factory tours for school and colleges,” said managing director Robert Willey. “We are thrilled to have been asked to support the Young Engineer of the year award at LAMMA 22, championing the future of British engineering.”

“We were so impressed with the quality of applicants for the award in its first year, and it was difficult to narrow them down to a shortlist,” added Kate Walsh, event manager of LAMMA. “The finalists and their products are testament to the ingenuity, resourcefulness and creativity of British agricultural engineering – and proof that our industry has a very bright future.”

Images of each of the finalists and their entries can be downloaded at https://we.tl/t-ynhuz0cKCD 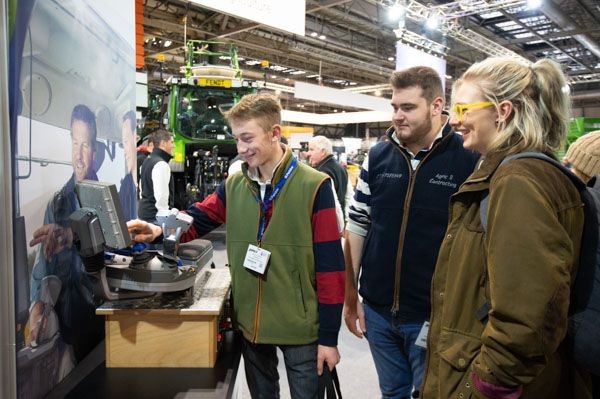