In March 1968 I joined T H White Sherton Ltd as a junior agricultural Salesman visiting local farms.  At the time T H White were the main aganets for Ford Tractors and New Holland Combines and Balers.  In the Summer of 1968 a Grand Tractor Launch was called by the Ford Motor Company to introduce their new Force Range Tractors from 2000's through to 5000's. 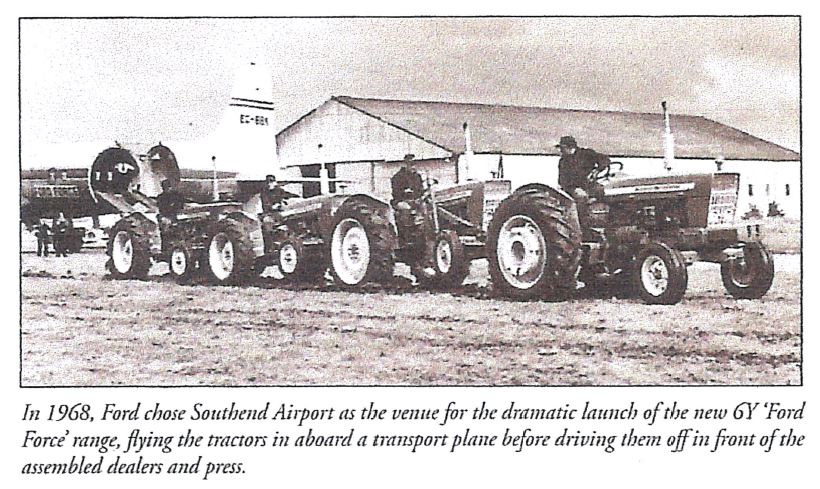 This launch started by my colleagues and myself embarking on an aircraft at Bristol Airport.  We were then flown to Southend Airport.  When we alighted at Southend we were escorted to a grandstand at the aiport where we had a light lunch.  The grandstand gradually filled up as other aeroplanes arrived with more delegates onboard.

Eventually a much larger aircraft landed and taxied around to the front of the Grandstand, the rear end opened up and we could then hear the wonderful sound of the ford Diesel engineas the demonstrators drove the new Ford Tractors from the belly of the plane.

The full range of 2000, 3000, 4000 and 5000 models were there and were driven aournd to the delight of all those attending.  We were given the opportunity to view the tractors before being flown back to Bristol Airport.  It certainly added excitedment to the launch and the transportation made a change from driving down the A4 through London and then the A12 to Basildon!

The memory of that day has stayed vividly with me ever since and the tractors were so successful.

PS. our Landwards Editor Chris Biddle was at the event - "I remember it very well as I was driving one of the tractors! I was working at Ford’s Training centre at Boreham House at the time, and we had loaded the tractors on a Spanish cargo plane which wouldn’t take off because the weight and we had to remove the weights and ballast before the pilot was happy.   Extraordinary days!"