The following is taken from David's funeral eulogy with kind permission from his wife, Liz

After completing his A levels at St Albans school David moved on to the National College of Agricultural Engineering in Silsoe, Bedfordshire. There in his third year David spent two months in Kenya on the college's overseas aid programme teaching the management of water resources. He loved Africa, it always remained a favourite place. In his free time there he went exploring - hitchhiking where he could. On one occasion he climbed a good way up Mt. Kenya. Seizing opportunities and exploring his surrounding where he could was to remain with him for the rest of his life. Whilst there he found time to visit the local railway station, met the local station master and made a beeline for the signal box, he was always interested in signalling. On the wall was a sign saying 'Remember Abermule' (referring to a dreadful signalling accident in 1921) little knowing that he would live so close to Abermule forty-five years later.

He was student president in his final year. Having gained his BSc(Hons) he won a scholarship to Iowa State University to study for a Masters degree in Agricultural Engineering. He was invited to stay on and work for a PhD in Civil and Geotechnical Engineering. To fund this he took on a teaching role at the university for nine months of the year allowing him to travel for the remaining three months. He went trekking in the Grand Canyon, white water rafting, exploring Alaska and visiting many of the national parks - preferably camping to really appreciate the sights.

After a few years in America, armed with his PhD, and by then an Associate Professor in the Civil Engineering Department, he returned home and found a position at the Scottish Institute of Agricultural Engineering. He enjoyed three years at Penicuik, often walking in the Pentland hills. Then in 1986 he moved south to the National College of Agricultural Engineering in Silsoe, Bedfordshire. He was a lecturer teaching and motivating students, in such subjects as land surveying, water management and soil mechanics. At one point David had a Russian soil scientist studying soil compaction with him. David was approached by MI6 to keep an eye on him. The Russian spent many hours photocopying every book he could find about soil compaction. David had to give weekly reports back to MI6. There was great puzzlement as to why he was so interested in soil compaction because from a military point of view that would be inevitable when any tanks rolled over a border. When he returned from a short break in Russia he came bearing gifts of Samovars for David and the Head of Department, assuming they were bugged it caused great amusement as to what it might relay to the Russian embassy.

Within a few years he moved over the road in Silsoe to Wrest Park, the leading Agricultural Research Centre of its time. There he made an impression with his fine engineering skills, his people skills and hid general knowledge. A former director recently sent this tribute:

'David was just the best member of staff anyone could wish for, he always had a big smile, was always coming up with a new idea or new angle on an old problem, and was amazingly versatile in tackling any situation he was faced with.'

David took up horse riding in the early 1990s, but it had to fit in with all his other long standing interests: 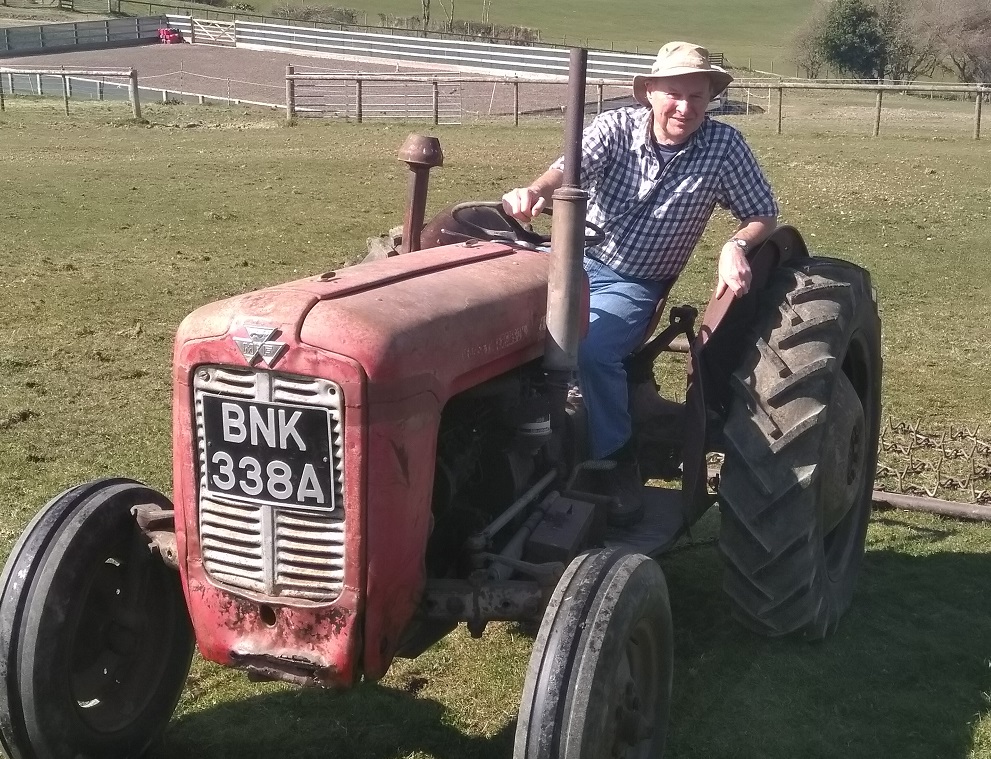 Only someone with his orderly mind could have done it. If he took something up he wanted to it the best he could. He was persuaded to enter a couple of his engineering models at the prestigious International London Engineering Exhibition at the Alexandra Palace. Needless to say his models both won a Gold Medal. Modest as ever David would point out all the faults in his exhibit and why perhaps the Silver or Bronze models were more impressive.

Horse riding became a passion and pleasure, first with Liz's and then with his own horse Claude. He loved riding out in the countryside. He shared Liz's interest in natural training methods and equine behaviour. His talent as a natural unflustered rider led him to join the horse travel firm Unicorn Trails in 2004 as a director. He rode with them all over the world - Madagascar, Morocco, Iceland, the Yukon, Russian, Iran, Jordan, Patagonia. His favourite was the trip from Chile to Argentina riding over a near 15000ft pass. He kept a photo of that epic on his desk.

One can not mention David without mentioning his love of steam railway groups. It did not matter if it was standard or narrow gauge. But it was the Welsh narrow gauge that he was most drawn to. Helped by their existence in quarries or docks or coal mines he could combine his love of steam with his fascination about the geology of the landscape and the industrial archaeology. He was on the technical committee of the international model railway group the Gauge O Guild and was actively involved in various projects for the guild as well as offering verbal and constructive help to other members via the forum. He very recently received the 'Award of Merit' for exceptional services to the Guild and its members - an award not often given out. He was humbled and delighted and typically puzzled as he did not think he had done very much to deserve it. He was a first class model maker and enjoyed making exceptionally challenging working pieces, just to see if he could which he invariably did.

Of many personal recollections of David two come to mind. Many men have a shed or man-cave. Both here in Wales and n Bedfordshire (before he moved) I was overwhelmed by David's, it was a man-palace. Firstly, there would be the tractor shed but not with just any old tractor it would be a restored vintage one. Then there would be a tool shed, everything in its place and properly labelled, Finally, there would be the workshop for mending and making things. He could turn his hand to anything and it would be immaculate. My second is from the time when David visited our farm in Yorkshire. We showed him the remains of a Victorian milling floor and the adjacent engine house. There was just one grindstone and a few rotten pulleys left. Half an hour later he had drawn a representation of how it would have looked and worked, where the steam engine would have been and what horse power was required. He was a mine of information on anything to do with the history of machines.

David had three careers, a university lecturer, a research engineer and an internet marketeer. But he was an engineer through and through. He was a clever but modest man, exceptionally talented but always encouraging to those less so. He was massively skilful and knowledgeable but not remote or daunting to others. He was always kind and polite, seeing the best in people, almost to a fault. He was compassionate generous and helpful.

He was happy to move to Wales in 2015, being of Welsh ancestry he soon settled in and he and Liz his wife and a delightful property inside and out. He really liked getting to know new friends nearby, who have made him feel very welcome. It gave him great pleasure in his final weeks and days knowing that Liz would always have good friends to turn to.

David was taken to the hospice, a wonderful compassionate caring place, full of amazing people in mid-April. It was a shock to everyone there and at home when he died a mere ten days later. His life touched so many people and he will be sorely missed, but especially by all his family - his mother Rosemary, almost 97, his brother and his family in Sweden, his sister and her daughter in the UK. He made friends in so many different fields of life who will miss him. Our thoughts are especially with Liz, his rock, soulmate. He was at peace before he died and reconciled to his end.

He always had a big smile on his face and put a big one on so many other people's faces. That is how he would like to be remembered.